Twin Construction teamed up with interior designer Shea Bryars to create a light, airy kitchen that sets the stage for cooking, music and fun. 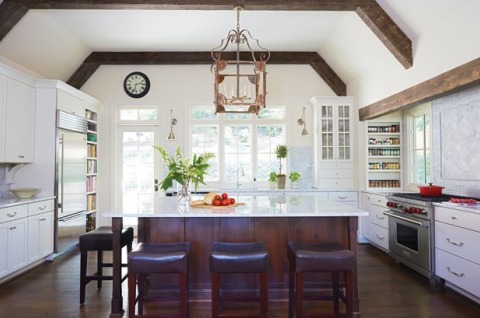 Julie and Eric Jurotich might be Edgewood’s biggest fans. “This is our third house in a quarter-mile radius,” Eric says. The couple wanted a smaller house in their favorite neighborhood with living and entertaining space both indoors and out. Julie found the perfect home at her workplace—Twin Construction. The company had recently bought a house to renovate and resale, and before work even began, Julie fell in love with the proposed floorplan. “The house sits on a double lot perched on a hill.  This allows for more privacy than most Homewood lots,” explains William Siegel, co-owner of Twin. “The house was a one-story rancher, but we knew we could add some architectural interest.” Twin rebuilt on the original footprint, with lots of input—including many kitchen details—from the Jurotiches and from interior designer Shea Bryars of Twin Interiors. “It’s the most open space, both in terms of size and feel,” Julie says. “It’s the heart of our home.”