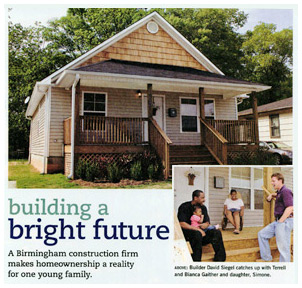 A Birmingham construction firm makes homeownership a reality for one young family.

If you’d asked Bianca Gaither a year ago, she would have said that owning a home was a distant wish. Even today, living in her new two-bedroom, two-bath house in Birmingham’s West End with her husband, Terrell, and their two children, she’s still in shock. With the help of Outreach Inc. and Mission Birmingham, two faith-based organizations, and Birmingham’s Twin Construction, the Gaithers now own a home.

Mission Birmingham and Outreach Inc. work to help provide homes for middle- to low-income families. Their approach is unique: Instead of building houses randomly around the city, they focus on revitalizing one community at a time.

This strategy appealed to David and William Siegel, twin brothers, owners of Twin Construction, and members of the Greater Birmingham Association of Home Builders, who were looking for a way to give back to the community. “We had tried to work with other organizations, but the timing wasn’t right,” David says.

Although they previously had contributed to charitable projects in the area, the Gaither residence was the Siegels’ first major undertaking. They were pleasantly surprised to receive some discounts and donated items from vendors and suppliers. That generosity enabled the brothers to include valuable upgrades such as vaulted ceilings, granite countertops, and hardwood floors.

In addition, Bianca had creative say in the design of her house, from the lot and the layout to her choice of paint and carpet. “I’ve learned a lot about houses,” she says.

On the day of closing, the Gaither family purchased the 2,400-square-foot cottage home for just $92,200. Terrell, who grew up in West End, is particularly thrilled to be a part of rebuilding his old neighborhood. According to Bianca, he’s already met all the neighbors on the street.

With such rewarding results on all sides, the Siegels look forward to similar ventures in the future. “It was a rewarding project for us,” David says. “Bianca was so refreshing. She was excited about every step.”