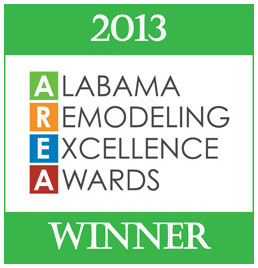 AREA 2013 WinnerMontgomery— A Birmingham-area remodeler has been honored with the highest award in the 2013 Alabama Remodeling Excellence Awards (AREA) competition. Twin Construction, Inc. received the coveted Best in Show award during the AREA banquet on Saturday, April 13 in Montgomery.

The Alabama Remodeling Excellence Awards, presented by the Home Builders Association of Alabama, were presented to remodelers, contractors, kitchen and bath designers, and other building professionals who exhibited outstanding craftsmanship and attention to detail in projects throughout Alabama. This year’s competition was sponsored by Alabama Power Company, Alagasco, the Alabama Home Builders Self Insurers Fund, J.F. Day/Pella, and Kohler.

For more information about the Alabama Remodeling Excellence Awards, contact the Home Builders Association of Alabama at (800) 745-4222. Photos of the winning projects may be viewed at www.remodelalabama.com.